Running the Race of Life… 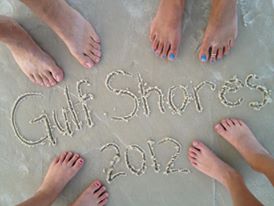 I have hesitated for some time to write a post on running. Exercise for me is a necessary evil. If I could invent a way to get the benefits of exercise without actually doing the exercise… I would be happy, and rich. Lots of things come easy for me in the academic world, nothing comes easy for me in the physical activity world. I am awkward at best. Now that I have been running consistently for over two years, I think I am safe to tell my story. It looks like this may be a thing I stick with for a while.

In late June 2012 I was sitting on a beach in Gulf Shores, Alabama. I had been on a journey to reach a certain goal weight for this trip, and for reasons I won’t elaborate on, I had missed that goal by a long shot!. Beyond trying to reach the goal for the trip, I had also wanted to reach this goal before my 40th birthday which was fast approaching. August 4th to be exact. Sitting on the beach I pulled out my weight loss app of choice and plugged in my goal and the time line. OUCH… there was no way it would happen… at least not the amount I wanted to lose in the time frame given. Especially if I was going to be healthy, not starve myself and be a good example of how to be healthy to my very impressionable nine and half year old daughter.

I was not happy… I was sliding into 40 over my desired weight and nothing to show on how I was fighting getting older with ferociousness. So, as I often do, I backed out of the weight loss app and proceeded to lose myself in the Facebook posts of the 100s of people I am “friends.” All while the little voice in my head kept whispering… “There has got to be something you can do. You can’t just give up.”  I had given myself the conciliatory resolution that I would still lose the weight, I just wouldn’t do it by my birthday. However, that didn’t seem to quiet the whisper.

And then I saw it… “Buddy Run 5K.” A fundraiser for a runner’s family. Buddy Hopkins in the spring of this year, in my community, had been hit and killed while out doing a training run for a marathon. This 5K was in my community, helping a precious family and, wait for it, was scheduled for my 40th birthday.

So on that beach I made a decision, set a goal and most importantly contacted a friend to tell them what I planned to do. I was going to use the next five weeks to train myself to run a 5K. I was going to run and complete a 5K on my 40th birthday. To make sure I did, I signed up for the Buddy Run on that beach, called my friend Sherri Daniel to ask her to run it with me, and found a Couch to 5K app to keep me on pace.

I ran that race and since then over a dozen other 5Ks, some 10Ks a few 15Ks, 4 half marathons and 1 marathon. 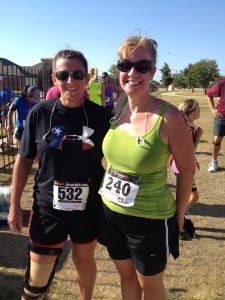 At the Buddy Run 5K finish line with my running partner. This is the first of many races we would run together.

I have learned that running is not easy for me. Although I run without stopping for many miles at a time, the first mile for me is as hard as the last mile. I do not get a runners high and lately my body has acclimated to the running where I no longer get the caloric burn benefit of running. But I keep doing it…

Why? Well, it reminds me of how something you can do over and over can continue to be a challenge. It helps keep me mindful of students where school and learning (in the traditional sense) is a challenge every day  and never gets easier. It also has shown me what a community that has all levels of skill can be like. The running community is very encouraging. From the fastest record breaking runner to the slowest wogger (walking/jogging) we all celebrate one another and our quest to finish the race set before us. It has been where I have formed some of my strongest friendships (you do actually talk a lot while running). It has given me the opportunity to connect with others through the IRun4 organization where I get to dedicate my runs to my buddy Abby whose physical limitations do not allow her to run. It has opened my eyes to see things in new ways… and frankly I like the fresher perspective. 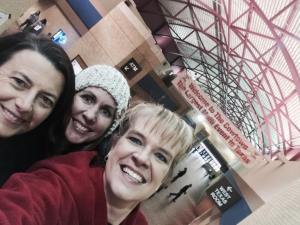 A quick selfie with my two running buddies Traci Bear and Sherri Daniel at the Cowtown Half Marathon 2015. First race we have run right after an ice storm!

What plans do I have next? Well I am not 100% but I would like to branch out beyond my community for races. I have learned that I prefer locally run races over nationally sponsored races. I also like races that benefit local non-profit programs and organizations. It is nice to bring benefit to something while doing something good for yourself at the same time.

If you run or have runs in your area… do you have one you recommend? Please share and if you have a link share that too.