A Boy and His Books…

This year Kritterman surprised us when he spread his wings and decided to be part of his elementary campus’ Battle of the Books club.

In the fall of 2014 Kritterman did just that. Most 3rd graders do not make it on a campus team the first year… but he did. From mid-November until late January he and 6 other teams of six to seven students per team met. Teams consisted of 3rd, 4th and/or 5th graders. Kristopher’s team was mostly newbies and had the most 3rd graders with a couple of 4th graders and no 5th graders. In late January all the campus teams would compete to determine the team that would represent the school in the district Battle of the Books. 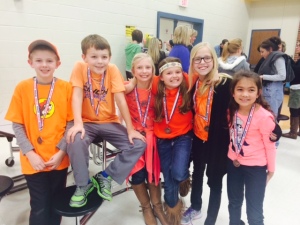 Odds were that his team would not be the campus team to move on to the district competition. However, they fought valiantly. They were a cohesive team, respected each others strengths and supported one another.

Kritterman was saddened by the loss, but is more determined than ever to return next year and come out on top.

Sometimes defeat is all the motivation needed. Now Kritterman has the experience paired with desire to not allow defeat again.

How has defeat turned into determination for you or your children?